opensourcemirror
/
RFLink-ESP
mirror of https://github.com/Stef-aap/RFLink-ESP.git
Fork 0
Code Issues Projects Releases Wiki Activity
You can not select more than 25 topics Topics must start with a letter or number, can include dashes ('-') and can be up to 35 characters long.
160 Commits
2 Branches
0 Tags
31 MiB
C++ 92.6%
C 7.4%
master
V2.1
Branches Tags
${ item.name }
Create tag ${ searchTerm }
Create branch ${ searchTerm }
from 'master'
${ noResults }
Go to file

This is a fork of RFLink, build for the ESP8266 and the ESP32.
The previous versions (2.1 ... 2.4) have been proven to be stable, running 24/7 for over 2 years without any problem.
Version V3.0 is a complete rebuild, based on my standard Sensor/Receiver libraries, which is easier to maintain and opens the possibility to easy add new features.
I believe that one or more of the forks has a better RF detection.

If all build flags are enabled, to include as much libraries as possible, the following libraries are needed: 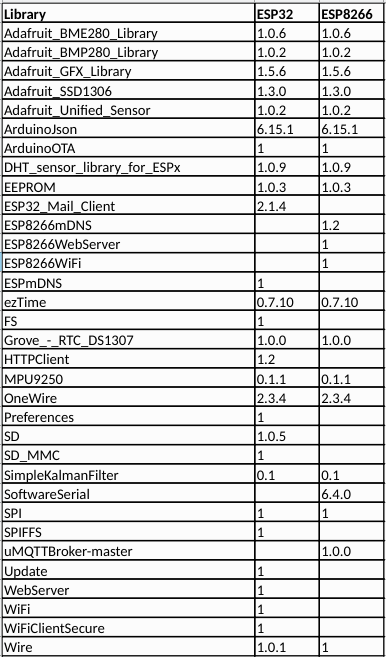 V3.1 of RFLink-ESP has the following new or improved features

forked V2.1 and made it more compatible with other Bridge-libraries. https://github.com/schmurtzm/RFLink-ESP

Home Assistant / Domoticz tested with a RFLink, modified for ESP8266 and ESP32

This is a fork of RFLink, and because we couldn't get it working reliable, we ended up in a complete rewrite of RFLink.
Problem is that the latest version of RFLink is R48. We couldn't only find sources of version R29 and R35. Both sources didn't work correctly, R29 was the best. We tried to contact "the stuntteam" which owns the orginal sources but no response.

This version of RFLink-ESP has the following features

Some ideas for the future